“Why she chose not to inform us we’d be sleeping above an actual dungeon remains a mystery.”

It was a fairly painless three-hour trip from Kutaisi to Tbilisi at the back of a marshrutka, a shared taxi that is typical across post-Soviet countries. Our first experience of the city was Didube – a chaotic terminal for buses and taxis which can only be described as the Slough of Tbilisi. Because I insisted on having an authentic Soviet metro experience, we battled our way with suitcases past countless offers of a taxi, through a hectic marketplace to the station, where we were stared at by everyone for being the only tourists with luggage stupid enough not to just get a cab.

Our Airbnb was a wackily decorated apartment on the 16th floor of a grey high-rise, situated near the Technical University and the colossal Tbilisi Sports Palace (once the largest basketball arena in the entire USSR!). An elderly lady showed us round via the medium of mime, and once she had left we slumped across the sofa admiring our personal panoramic view of the city. Tbilisi is an unusual shape for a capital, hemmed in by hills on either side and centred along the Mtkvari River. The area we headed to on the first evening was of course the old town – an immaculate display of traditional Georgian houses nestled alongside the sulphur baths for which the city is known. The metro is dimly lit and crowded with unsmiling faces; the engines so deafeningly loud they become hypnotic. Emerging from the station at Avlabari, we followed signs towards the river and were met with a stunning view of the Narikala Fortress, lit up on the hillside with the old town and the flashy new Bridge of Peace below. There is no doubt that this place is ready and prepped for the predicted rise in tourism as flights cheapen and the popularity for quick city breaks grows. 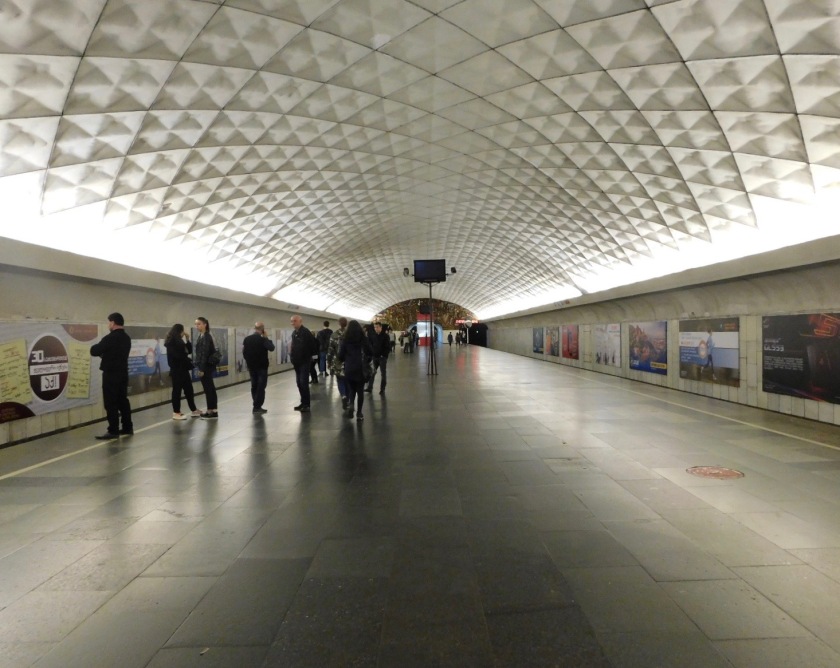 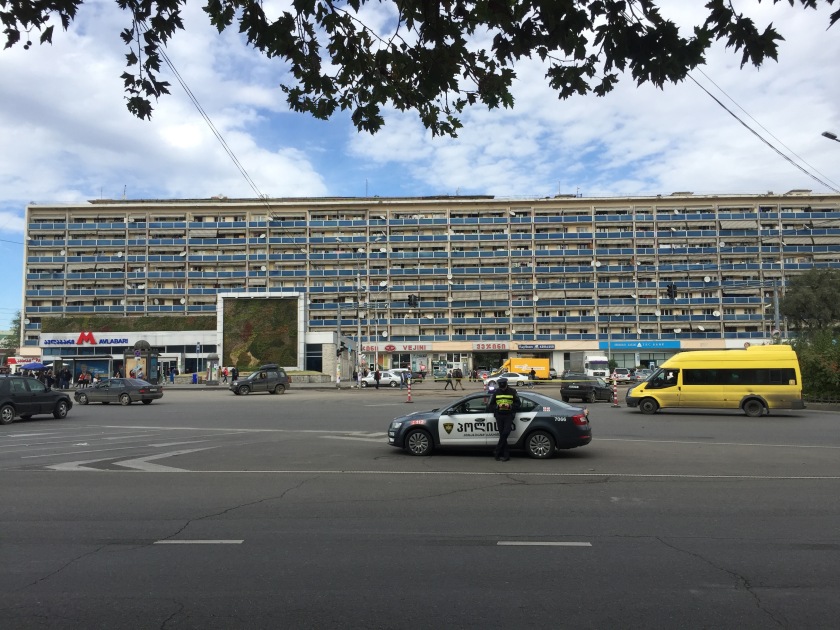 A policeman checking Insta at Avlabari.

Metekhi Bridge in front of the Narikala Fortress.

The picturesque coloured buildings of the old town cluster around a square where one of those interminable Covent Garden-style street performances was going on. Across the road from here are a series of alleyways where you can find every type of restaurant and bar from Georgian to Thai to the omnipresent Irish pub. We settled on an extravagant establishment called Blackberry, decorated with gaudy chandeliers and plush purple thrones, choosing a round table set for eight. Yes, this was a bit of a ridiculous place to choose and the décor not “traditionally Georgian”, but if you can’t go a bit wild on your holidays when can you? I enjoyed my first Adjaruli khachapuri, perhaps the most photographed Georgian dish, involving of a boat of dough filled with melted cheese and a gooey egg smothered in butter and baked. It was indeed as warm and comforting as it sounds. The country is famous as one of the oldest wine-growing regions in the world, so I washed down my khachapuri with a very pleasant glass of Georgian white called Mtsvane. Blackberry also provides several varieties of shisha, so after your meal you can lounge around smoking and listening to the acoustic singer they have perched in the middle of the restaurant. Sinking deeper into my audacious velvet throne, I felt more relaxed than I had done all year.

Although on a steep hill, Tbilisi’s old town area is nice and compact so can be explored in a day. I would recommend trekking up the hill to the fortress then sitting directly under a large statue called Mother Georgia (you definitely won’t miss it) and admiring the view. There is also a modern cable car which takes you there and back if you’re feeling lazy. Avoid the conmen at the top of the hill who reel punters in with doped exotic animals then charge for the small pleasure of holding one. If you’re feeling weary from traipsing around, the best place to wind down is one of the city’s many sulphur spas. The most touristy and impressive looking is probably Abanotubani, but we headed for the slightly shabbier Gulo’s, where you can hire a private room for 20 lari ($7.70) an hour. A woman hands you a towel and flip flops, then you are left to your own devices in what is essentially a big smelly bathroom. We sunk into a large tub of scolding water, fully immersing ourselves in that unavoidable rotten egg stench before jumping under an ice cold shower and repeating. Would I go back and do it again? I’m not sure but, interestingly, the odour reappeared in my urine for the next 24 hours, so that was an experience in itself.

The lazy man’s way up.

A not-so-flattering angle of Mother Georgia. 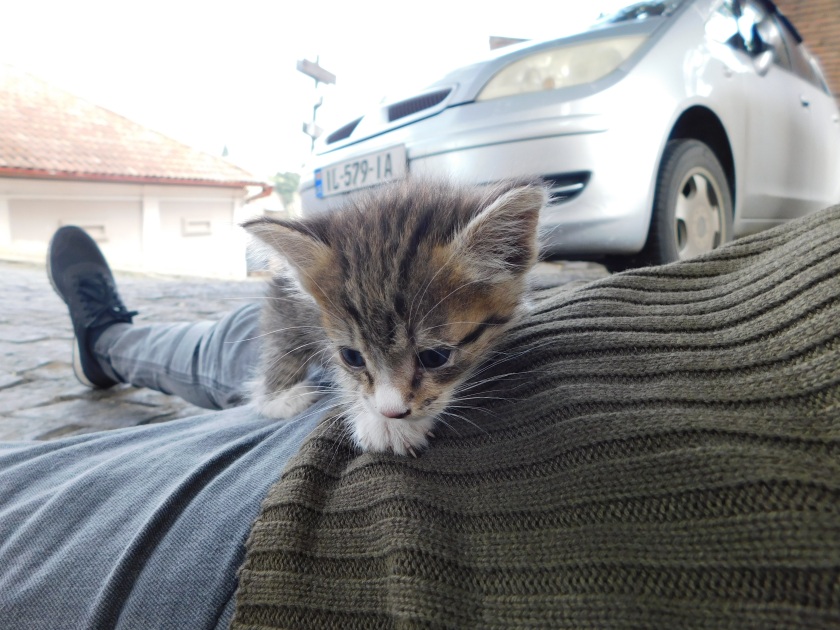 A young friend made in the Old Town.

The following morning (my 24th birthday) we had planned to visit the stunning mountain village of Kazbegi, however the rain and snow were so heavy and constant that we were sadly forced to call it off and scrabble around on Booking.com for some last-minute accommodation. This led us through some of the heaviest rain I’ve ever experienced to a bizarre ground floor apartment in the Marjanishvili area. A lady showed us round the main room and facilities which were nice enough, but neglected to explain anything about a mysterious flight of stairs leading down from the kitchen. Upon further investigation, I discovered it was in fact a dungeon, complete with hooks hanging from the ceiling and fur hanging from the walls. Why she chose not to inform us we’d be sleeping above an actual dungeon remains a mystery. The heavy rain then caused a power-cut, so I spent a memorable and weirdly pleasant birthday in dusky grey light playing card games, accompanied by the numerous flies that had decided to shelter with us.

My extended period in Tbilisi was soundtracked by a range of artists from Mike Posner to G.R.L. to Sade. The main album I had on the go, however, was Miley Cyrus’ Younger Now – the “I’m actually sensible” follow-up to her rollercoaster repertoire, the unavoidable Bangerz (2013) and the uncomfortably disturbing Miley Cyrus & Her Dead Petz (2015). I’m still trying to work out whether her notorious “antics” of 2013/2014 really were a personal act of rebellion, or an executive money-making decision made by RCA Records and her manager Larry Rudolph. Yes, she has indeed calmed down now and delivered an impressively mature and contemplative sixth album.

Younger Now replaces wrecking balls, shock haircuts and the brand-new art of twerking with wildflower meadows, rainbows and Dolly Parton. Week Without You, Miss You so Much and I Would Die For You seem to be about the realisation period at the end of a breakup, focusing on regrowth, dreams, the future and all manner of other wishy washy yet important topics. In Thinkin’, Miley ups the tempo and employs a classic Nashville twang, clearly influence by her godmother, Dolly Parton, who chimes in halfway through the album for a feature on the jaunty Rainbowland. The song begins and ends with a bizarre WhatsApp voice note from the country legend herself. I don’t really understand why Miley chose to put this in, but I suppose who wouldn’t show off about getting messages from THE Dolly Parton? Lead single, Malibu, takes a pensive and wistful look back at the places she grew up, while the album’s closer, Inspired, carries along this theme, lamenting the worrying environmental situation we find ourselves in. The last line of the album poses the age-old theological question “Is anyone watching us up there?”, which is quite a leap considering the last line of her previous album was “Fuck yeah”. For me, the strongest track is the opener, Younger Now, a steady-paced introspection on the many peaks and troughs of growing up. It is the perfect song if, like Kylie Jenner in 2016, you’re at a point of realisation in life. With the iconic tongue poses of 2013 a distant memory, Miley’s sixth studio album is a new direction, and likely more authentic to the person she actually is. But I can’t help thinking… is it not just record label fluff to go alongside her much better (and also gothy) younger sister, Noah Cyrus’, rising pop career?