“Azerbaijanis clearly know how to have fun, and it was great to be part of whatever it was they were celebrating, despite being uninvited strangers.”

My friend, Abz, and I are in the middle of a ten-day overland adventure taking in two countries in the Caucasus region. After half a week exploring Georgia, which predominantly practices Orthodox Christianity, it was now time to head over the border to the Shia Islam country of Azerbaijan. Arriving in a country I knew very little about beyond its many Eurovision douze points, I was intrigued to see what this distant oil-rich nation on the Caspian Sea had to offer.

Trains from Tbilisi to Azerbaijan’s shiny capital, Baku, run every night and take around 13 hours. The idea is you go to sleep in one city and wake up in another, although, in reality, “sleep” is a misconception when you’re crammed into an airless four-berth cabin with an elderly Japanese couple. The 2nd Class carriage is kept under tight control by two rotund Azeri aunties, who offer cups of black tea and dish out bedding with a permanent look of mischief. At around midnight, an unsmiling guard raps on the door to collect passports and visas, then, one by one, passengers are summoned into an empty cabin to be interrogated by two armed men. The aunties oversee proceedings, taking great pleasure in the general confusion of the whole affair. We were asked if we had been to Armenia which we vehemently denied. The two countries have been in conflict since 1988 over ownership of the disputed Nagorno-Karabakh region. If you try entering Azerbaijan with an Armenian stamp in your passport, you will be treated with a much higher level of suspicion. After an uncomfortable night, one of the aunties flung open the cabin door to announce we had half an hour left. Clammy and unrested, I stuck on American rapper/singer Post Malone’s 2016 debut, Stoney, and stared out at a grey morning on the vast empty flatlands that make up much of central Azerbaijan.

At around 7am we were finally freed from the confines of our cabin, and found ourselves in an empty modern station paved with glossy white marble. The Wi-Fi was instant so with not much bother we were able to email for an earlier hotel check-in and order ourselves an Uber. A fifteen-minute journey costs around 5 manat (£2.00) and, heading east along the bay past larger-than-life billboards and modern tower blocks, we arrived at our home for the next two nights. The Autograph Collection Boulevard Hotel is a wide white building which looks out on the Caspian Sea (technically the world’s largest lake), situated in a remote area dubbed “White City” by the city’s redevelopers. The air by the waterside is not something I’d experienced before – a warm breeze carrying the constant aroma of crude oil. Entering the Boulevard this disappears immediately as you are hit with crisp air conditioning and a subtle whiff of oud. This was easily one of the plushest hotels I have stayed in and a steal at £45 per night. The foyer is vast, pleasantly lit with modern chandeliers which are raised above a selection of lounge furniture to suit every mood. Our stylish city-facing room looked over what was currently still a building site, reinforcing my impression that we were here pre-regeneration. Drained and smelly from the train, it was time to spend the day living like kings, indulging in all the offerings of the pool, spa and massage rooms. After a hearty meal downstairs in the White City Bar & Lounge, we went for a walk around the grounds and ended up gate-crashing a lively party in the hotel’s large ballroom. Helping ourselves to food from the heaped buffet, and cursing the fact we’d already paid for dinner, we bobbed along to the live swing band and tried not to look too out of place. Azerbaijanis clearly know how to have fun, and it was great to be part of whatever it was they were celebrating, despite being uninvited strangers. 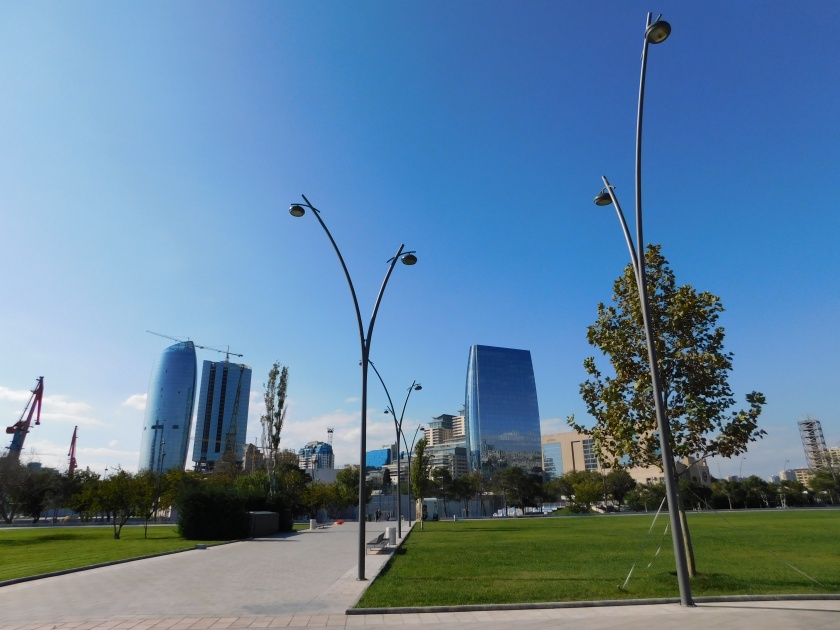 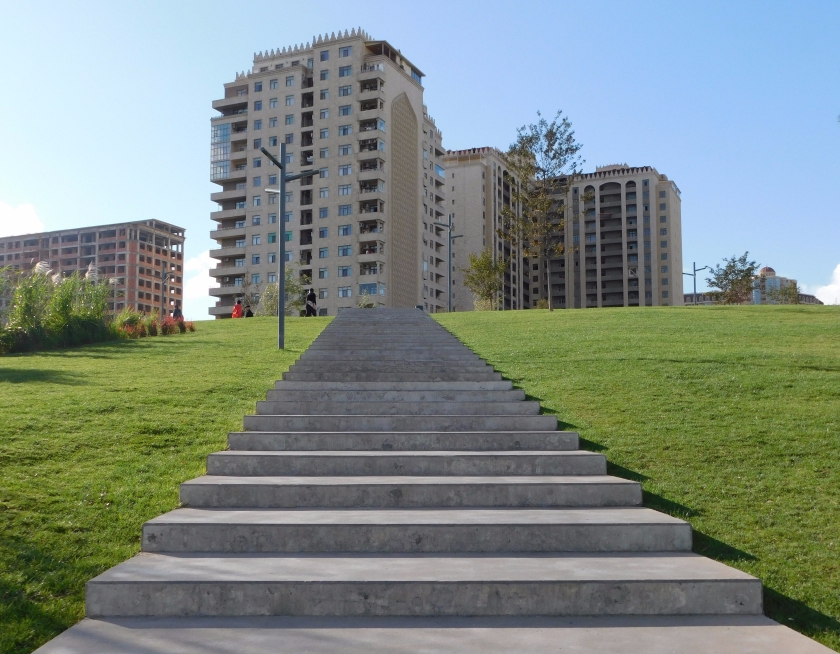 Baku is crafting itself as a city that impresses. Since its independence from the USSR in 1991, Azerbaijan has focused its oil wealth on the capital, creating a cosmopolitan atmosphere around unique and stunning landmarks that rightly give Baku its reputation as the “Dubai of the Caucasus”. The sprawling Zaha Hadid-designed Heydar Aliyev Centre opened in 2012 and is an architectural treat. Made from shimmering white stone which curves pleasingly in every direction, this conference hall and museum sits proudly on a hill separating it from all other nearby buildings. The fluidity of the design means you can actually walk on the building itself and explore its exterior from every differentiating angle, making it a sure-fire Instagram goldmine. The centre is named after the former president, whose son, Ilham Aliev, has been in power since 2003. Aliev is a delightful sounding man accused of corruption and multiple human rights offences, whose convoy we actually happened to witness as we walked down Neftçiler Prospekti, the main street running alongside Milli Park. I went to take a photo of the line of official vehicles as they went past, but was immediately shouted at by an armed officer standing 50 meters away.

Milli Park, or Baku Boulevard as it is also known, is probably the most pleasant area to visit in Baku – a 3.75km stretch of greenery which serves as a recreational area and promenade between the sea and the city. Because I was chatting so much shit, Abz suggested a 5-minute spell of silence as we walked through the park, meaning we were able to more appreciate our surroundings rather than focusing on my usual slew of facetious comments and witty banter. The park really is lovely, and made for a perfect stroll all the way from our hotel to Little Venice and the Azerbaijan Carpet Museum, which is wackily built in the shape of a rolled up carpet. The museum is worth a visit but operates under a strict set of rules including not being allowed to walk on any of the carpets. We didn’t walk up to the iconic Flame Towers, rather admiring them from the stone streets of the Old City, where I spent a little too long trying to capture the obvious “old meets new” snapshot. The Old City, known as Icherisheher, is a well-preserved throwback to the 12th century. It was all too easy to imagine it as it once was – the gateway between China and Europe on the ancient trading route, the Silk Road. With J Hus – Did You See running round our heads, we got lost heading upwards through the narrow meandering alleyways, until we reached the ancient Palace of the Shirvanshahs, which unfortunately was just closing so I am unable to tell you anything about it. Luckily the walk was not wasted, as outside the palace you are blessed with a view across the city taking in the Flame Towers, which glowed orange in the early evening sun. 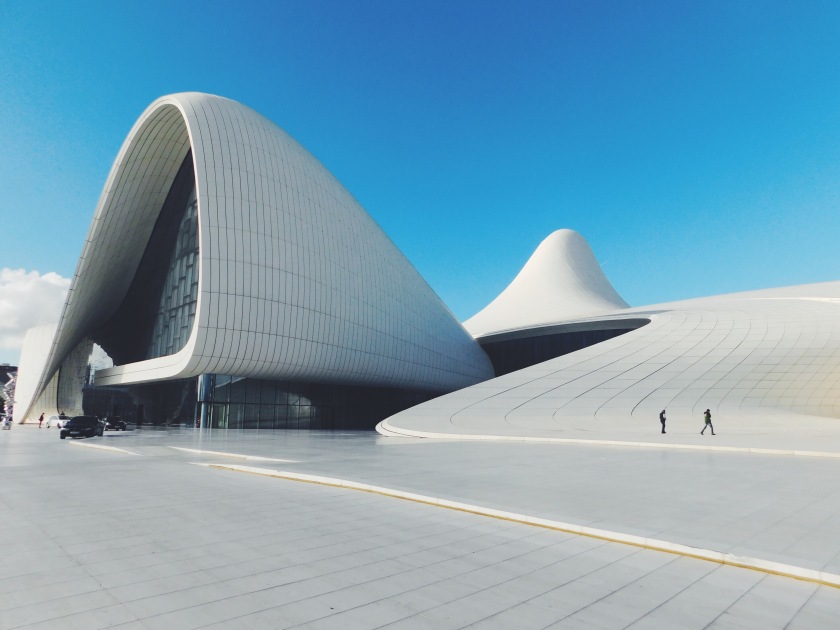 Neftçiler Prospekti, still decked out for the Azerbaijan Grand Prix

One thing weighing on my mind during the three days spent in Baku was the LGBT “crackdown” that had happened just a week before our visit. It’s not illegal to be gay in Azerbaijan but still, it has been rated as the worst country in Europe for LGBT rights, which is pretty embarrassing for a nation that is trying so hard to become a growing beacon for tourism and international trade. I can’t pretend I wasn’t a little on edge walking around knowing that at least 60 people taking part in LGBT gatherings had been arrested here the week before, mainly under the offence of “resisting police orders”. A spokesman for Azerbaijan’s interior ministry had said “these raids are not against all sexual minorities. The arrested are people who demonstratively show a lack of respect for those around them”. I wasn’t there, so it’s hard for me to say anything without assuming, but it seems the general attitude is “we know it happens, we just don’t want to have to see it going on”. The sad thing is that with global attitudes towards LGBT rights shifting so rapidly, there is now a reactionary movement to inhibit them in a bid to quash the so-called “gay agenda”, meaning that the lives of gay people in Russia and other post-Soviet countries have actually gotten worse in recent years. Baku is stunning and well worth a visit, but whichever way you look at it, Ilham Aliev’s dictatorial style of leadership and poor track record for human rights don’t do it any favours.

Final view of the city

Back on the 22:10 train to Georgia after three days in the Azerbaijan, I got up Post Malone’s Stoney again, and chose the aptly named track Leave to listen to first. Real name Austin Richard Post, and irritatingly one school year younger than me, the US rapper / singer / producer has become hugely popular over the past two years. Known predominantly on social media for his hairiness and refusal to shower, Post is also famed for his unique vocal range and slick production, blending a modern brand of wistful folk music with hip-hop and RnB. Broken Whiskey Glass starts with a bleak, urgent feel which carries on throughout most of the album. The structure for many of the songs, including Go Flex, I Fall Apart and Yours Truly, Austin Post is a bellowing polyphonic chorus surrounded by frantic verses, whilst the melody rises and falls restlessly. His early-20s struggle for success is evident, with money, alcohol and other temptations becoming a running theme. Congratulations ( feat. Quavo) and Deja Vu (feat. Justin Bieber) are its big sellers and instantly recognisable for their chart success, but that doesn’t stop them from rolling rhythmically along with the rest of the album, because really any of these songs would do well commercially given the right promotion. Hit This Hard is trancelike and mesmerising, while the instantly catchy Money Made Me Do It (feat. 2 Chainz) would fit in perfectly on any good pre-drinks playlist. Post describes his music as “genre-less”, but has been criticised for appropriating hip-hop culture. There are similarities in musical style to 6LACK and Khalid, along with clear Bob Dylan influences, particularly in the album’s closer Feeling Whitney. Post’s refusal to comply specifically to the rules of any set genre are what make him so interesting to many people. His unconventional appearance tells a story in itself, but it’s his impassioned lyrics and the brooding beat on each track that make him stand out.