In 1993, Bill Bryson said “Bradford’s role in life is to make every place else in the world look better in comparison, and it does this very well”, a statement which I feel was cruelly unfair at the time, and outdated in the present day. It’s true that Bradford gets a bad press. Within Yorkshire it can often be the butt of jokes, and is sometimes seen as a forlorn forgotten sister to Leeds, while select friends from The South will screw up their faces at even the mention of its name. The place Bryson visited whilst compiling his Notes from a Small Island was an industrial city post-Thatcher, which indeed must have seemed bleak, but fast-forward 25 years, and the core of the city has a very different atmosphere to what it once will have done. The first few years of my life were spent in the West Yorkshire town of Brighouse, so for me, any visit to Bradford, Halifax or Huddersfield evokes a degree of nostalgia at the sight of those sturdy brick houses and towering factory chimneys. On the second day of 2018, I took my friend Luke (a born and bred Londoner) to enjoy the sights and sounds of West Yorkshire’s hidden gem, the proud birthplace of J.B. Priestly, Kimberley Walsh and Zayn. Eleven months later, after a woefully disappointing sexual conquest in Harrogate, I put on Lil Peep’s posthumous second album Come Over When You’re Sober, Pt. 2, and took the bus back to Bradford with the intention of taking some decent photos for this site.

As a child, trips to Bradford meant one thing – a visit The National Museum of Photography, Film & Television (now The National Science and Media Museum). The wide-ranging and interactive exhibitions, along with adjoining IMAX cinema, would fill me with excitement, giving me my first experience of camera operation, green screen and an interest in filmmaking and television production from a young age. My Dad and I would spend hours in a section called TV Heaven, where you can select any episode of any show from the British television archives, then sit and watch it in your own booth. In the age of Netflix this sounds quite unremarkable, but back in the early 00s it was a mind-blowing futuristic treat. Visiting as an adult, the interactive sections don’t have quite the same draw, but up-to-date exhibitions on Fake News and “The History of the Internet” kept Luke and I entertained. With captivated brains but empty stomachs, we took a quick Uber up the Great Horton Road to the well-known Kashmiri eatery, Mumtaz. Every time I eat here, the service and food seem to be 10/10, and as it was that strange first week of the year when everyone is still in hibernation, the stylishly decorated restaurant was virtually empty and we were well looked after. First opened in 1979 by someone’s grandma, Mumtaz prides itself on being a British-based Pakistani institution that now has three restaurants across the north, as well as producing its own international brand of ready meals and halal baby food. There are plenty of great places to explore for a curry in Bradford, but it’s usually Mumtaz that I end up at.

The National Science and Media Museum.

The presence of large Pakistani communities in Bradford and West Yorkshire is mainly owing to the fact that during the 1950s and 60s, many moved from the Azad Kashmir region of Pakistan (then part of the British Empire) to assist with the steel and textile industries which had suffered a major labour shortage following the Second World War. The decline in British industry under Thatcher’s government then left thousands of Bradford residents (White and Pakistani) without work, accelerating the social issues and racial divisions which sadly continue today. Discrimination and Islamophobia against the Pakistani communities in West Yorkshire are a common problem. One young white lad from Keighley, whom I met in a Leeds nightclub smoking area, described his hometown as being “full of p***s” who drive around at night and cause trouble. Presumably this means there are no young white men in West Yorkshire who do the exact same thing? Looking past the obvious racial tensions, it’s clear that communities from all backgrounds in places like Bradford, Huddersfield, Dewsbury and Keighley have been severely neglected by the government since the 1980s. If the pipedream of Brexit becomes reality, then maybe Bradford will start to see fresh opportunities and industrial growth again, with new jobs for people from all backgrounds, but who knows at this stage; certainly not the people in charge! 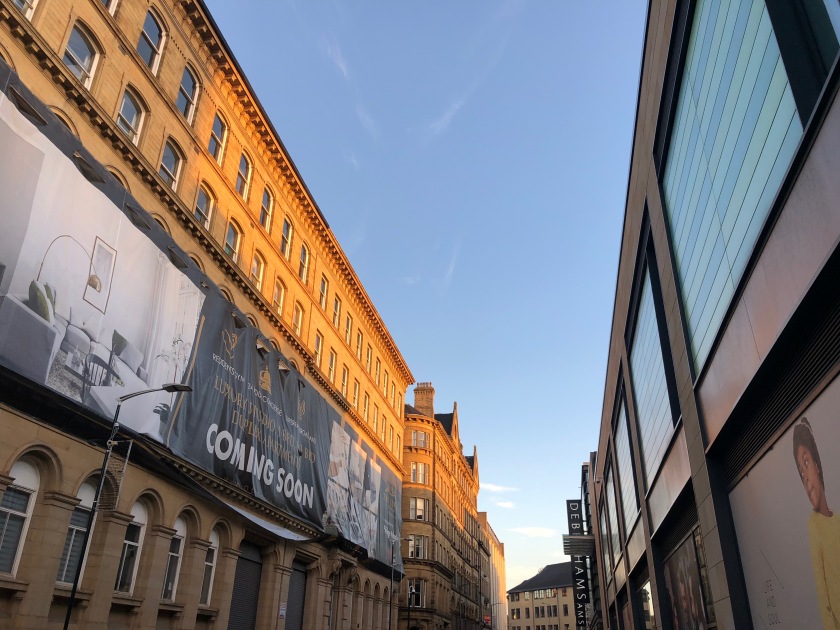 Change in the air: Bradford architecture old and new.

Luke seemed very pleasantly surprised by his Bradford experience so far, and it was only about to get better, as we had pantomime tickets (I know) for the Alhambra Theatre. The Alhambra is a carefully preserved Grade II listed building in the heart of the city, a proud relic of grandeur from the height of industrial boom. I was lucky enough to see Priestly’s An Inspector Calls here a few years ago, but it’s during panto season that the place really flourishes. Every year, Luke and I have a running joke over the outrageous pantomime line-ups on offer around the UK. From Katie Price as Maleficent in Woking, to Joe McElderry as Aladdin in Wolverhampton, the obscure combinations never fail to amuse, and tonight’s offering of Coleen Nolan as the Fairy Godmother in Bradford was no different. The show, which included a bizarre segment halfway through involving 3D glasses, also starred the ceaselessly energetic variety favourite “Yorkshire’s Panto King” Billy Pearce, along with (disappointingly) Coleen’s son, Shane Richie Jr. As she didn’t seem in the mood for dancing, the Loose Woman was transported in for her opening monologue on a large hoop suspended from the ceiling, reminiscent of a P!nk concert. There then ensued a lively evening of song, dance and lewd innuendo for all the family. We left the performance with smiles on our faces, despite headaches, temporary deafness and mild shell shock.

The beautiful Alhambra Theatre, built in 1913.

On my return to the city some eleven months later, it felt more like a year or two had passed. Stuck in an overly demanding job for a company I hated, and hooked on a selfish idiot for way too long, 2018 was a year of deep frustration which turned into one of great reflection and self-realisation. On that particular autumn morning, I woke up in Harrogate at said idiot’s house with the decision that it was time to Dua Lipa New Rules-it and never speak to him again. Having recently handed in my notice and booked a solo trip to Marrakech, I was in the midst a pretty major “fuck it” phase. Listening to emo rapper Lil Peep as I arrived back in Bradford, I got off the bus into the sunlight and looked up at the city’s former Wool Exchange, a beautiful gothic building which is now a large Waterstones. While the regeneration of Leeds has made it the dynamic and bustling modern city it is today, a Saturday afternoon there will involve dodging rowdy stag dos and persistent charity workers, only to trip over a horizontal spice addict. Bradford seems to have preserved a calmer and more family oriented atmosphere, with the bright, modern Broadway Shopping Centre opening in 2015, and the complete transformation of Centenary Square which opened to much jubilation in 2012. At the focus of the square is the serene Mirror Pool, which families can sit around and enjoy in summer, and there is also a raised platform away from the pool which serves as an ideal hangout for local yutes. During golden hour the place is so calm and relaxed that you forget you’re in a city centre at all – certainly a far cry from Bill Bryson’s Bradford of the early 90s.

Golden hour at the Mirror Pool in Centenary Square.

Lil Peep (real name Gustav Elijah Åhr) was a hugely talented American rapper who rose to popularity via Soundcloud, becoming a key figure of the mid 10s emo revival movement within hip hop. Instantly recognisable for his startling facial tattoos and bleached hair, Åhr led a troubled personal life battling mental illness and addiction, very sadly leading to his death by accidental overdose aged 21 in November 2017. Come Over When You’re Sober, Pt. 2 is a posthumous collection of previously leaked tracks, many of which focus on depression, addiction, the frustrations of living in modern-day America and the general feeling of otherness which affects so many young people today. Growing up I never really went through the typical “emo phase” which some teenagers experience and, on the whole, the music I listen to is often upbeat, but Lil Peep’s lyrics and outlook somehow resonated with my state of mind during the autumn of 2018. The beat to Falling Down (feat. XXXTENTACION) and its repeated chorus, the melody of which contours hypnotically, carried me through much of this period. My impression is that the song is about reaching out to those closest to you and making sure you experience the best and worst parts of life together, with the lyric “sunlight on your skin when I’m not around” maybe alluding to the shiny filtered Instagram images we now see of our friends daily. Their conversational excerpt on the abruptness of death is especially poignant since both artists have now passed away. Life Is Beautiful voices the pressures to stay positive and elated even when faced with tragedy and grief, while in Cry Alone, he vents his resentment at feeling like an outsider in his own hometown. Whilst this may not be an album to put on at your next cheese and wine night, it’s interesting how useful this type of music can be when you’re in a low place. The more it is discussed, the more it becomes clear that mental illness and depression will affect everyone in different ways at any point life. While parents of teenagers may worry about the influence an artist like Lil Peep could have, his lyrics are actually incredibly important because they voice those feelings of negativity that young people might not otherwise be able to put into words. Listening to emo rap doesn’t mean your sixteen-year-old is about to get a large tattoo above his right eyebrow, but on some level he might relate to the feelings of hopelessness and disparity that Lil Peep and many others convey. Trends in music will always reflect the general zeitgeist, especially amongst young people, so the fact that emo rap has seen a recent wave of success in the charts from artists such as Juice WRLD, Lil Uzi Vert and Lil Yachty is no coincidence, not to mention the ghostly demeanour of pop’s latest goût du jour, Billie Eilish. Both Lil Peep and the now infamous XXXTENTACION have left behind a genre-defining legacy which I expect we will still be hearing influences of in years to come.

Listen to Come Over When You’re Sober, Pt. 2 here.